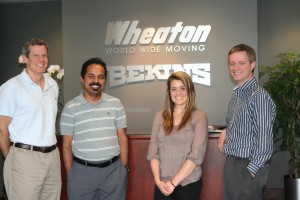 Let’s just say Wheaton employees ‘get moving’ on many levels.  When they are not focused on relocating household goods with intricate care, they are on the move training for half marathons such as the 2014 Indy Mini-Marathon that will take place on May 3, 2014.

Five employees from the corporate office out of Indianapolis, Ind. will be participating in the Mini-Marathon. Of course signing up and committing to some 13 miles does not happen overnight. It takes motivation, endurance, and for some, extensive training. So kick your feet up and enjoy the stories of these dedicated ‘Mini-Marathoners’.

From left to right.

CIO, Jerrod Carter has worked at Wheaton for some six years working within the Information Technology Department.  With a history of running, this will be Jerrod’s seventh Indy Mini-Marathon and ninth half-marthon overall. In addition, he has run three full marathons.

More confident than ever, Jerrod feels that this race is sure to be a success after maxing out on miles per week ran during his training.

“My advice to someone considering running a mini-marathon is to stick to a training plan,” said Carter.

Last year, Carter ran enough that he was able to join the ‘Half Fanatics’ group. So watch out for ‘Half Fanatic’ #5163 at the Mini-Marathon this year!

Damodara Yemme has been working at Wheaton’s corporate office for eight years within the Information Technology department.  Yemme’s motivation behind running is to fulfill his New Year’s resolution. In addition, he feels that it is a great way to stay active, a social outlet and hobby.  Yemme has run two races prior to the Indy-Mini, including Sam Costa Quarter Marathon and Carmel Half Marathon.  He contributes a great deal of his preperation to both of these races.

“ Running is a great way to maintain my health and physical condition,” said Yemme. It is also refreshing after a long day at work. “

Yemme is a big fan of the Run Keeper App that he has downloaded onto his phone. This app allows several functions that will make tracking your run simple.  It is also the ‘keeper’ of his playlist of ‘pump-up’ songs to finish each run stronger than the last.

Look out for this determined ‘First-timer Indy-Mini Runner’, it might just be the first of many for him!

Catch up with Gary:

Vice President of Operations, Gary Reynolds has been employed at the corporate office for 12 years. Reynolds has particpated in nine Indy-Mini Marathons prior to this one. Primarily a walker, he is dedicated to keeping in shape by walking for the half marathon. “ Advice on completing a half marathon,” said Reynolds, “just get out and do it.” Reynolds suggests that walking is a ‘futile attempt to escape advancing age’.  He also suggests that instead of plugging into some great tunes, walking is a great time to be alone with your thoughts.

Catch this swift walker among the pros come May 3rd at the Indy-Mini!

Getting up to speed with Ron:

Assistant Vice President of Operations and Director of Traffic, Ron Borkowski has a long history with Wheaton. Starting with the company in 1986 as a traffic planner and has held a number of positions throughout the years.

In addition to a long history with Wheaton, he also holds a long running history.  Borkowski has successfully completed somewhere between 15-20 full-marathons, including the Boston Marathon last year. This will be his 16th Mini-Marathon.

The challenge of the marathons inspire and motivate him to continue his marathon streak. His training consists of a combination of weights, mixed with cardio, such as biking and stair climbers.

Content Development Specialist, Emmalee Strait just came on board with Wheaton in November of 2013 in the Sales and Marketing Department.  After taking on a new job, she also decided to take on the task of running the Indy-Mini Marathon for the first time.

Motivated by staying in shape and healthy throughout the winter months, she has been training with some close friends for the race.

“I am anxious and excited for the Indy-Mini,”said Strait. “I am running the half marathon with my college roommates, so the memories being made mean the most to me!”

She attributes accountability from training with friends to be one of the best preperations for the race.  Like Borkowski, she joined the Blue Mile running club which has helpd prepare her. With good friends, a good playlist, and some good training – she is ready to hit the road running on May 3!