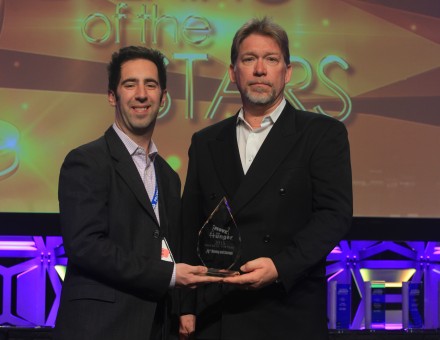 FAYETTEVILLE, N.C. ─ Move For Hunger recently announced A+ Moving and Storage, an interstate agent for Wheaton World Wide Moving, as its 2015 Mover of the Year. A+ Moving and Storage was chosen from more than 600 relocation companies in the Move For Hunger network across North America. The Mover of the Year Award is selected based on the movers’ commitment, impact, dedication and enthusiasm for ending hunger in its community.

“Move For Hunger is an excellent program,” Jerry Hare, owner of A + Moving and Storage. “All you have to do is put together a little bit of time, put forth a little bit of effort and want to give back to the community. It’s all about giving back to your community.”

The family-owned and operated moving company has been an interstate agent for Wheaton World Wide Moving since its inception in 2003. Wheaton World Wide Moving is a founding partner of Move For Hunger since it was established in 2009. A+ joins AMWAT Moving & Warehousing in Tallahassee, Fla. and Crown Relocations in Keasbey, N.J. as the third Wheaton interstate agent to earn the title of Mover of the Year from Move For Hunger.

The Mover of the Year Award was presented at the annual American Moving & Storage Association (AMSA) Convention and Expo on March 22 in New Orleans, La. in front of the leaders of the relocation and storage industry.