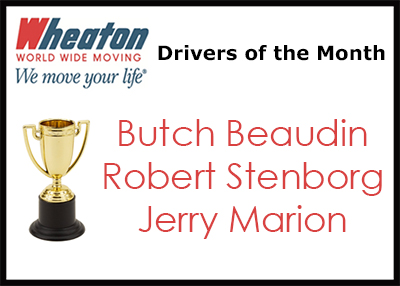 The following drivers have been selected as the December 2016 Drivers of the Month:

Direct Lease Driver of the Month, Butch Beaudin, Conrath, Wis., is a veteran driver with more than 40 years of experience as a professional household goods mover. Butch has a great driver rating and this is his eleventh Driver of the Month award with the van line. Butch also was named Driver of the Year in 1996 and 2002.

Move for Hunger Names Wheaton World Wide Moving Agent of the Year
Move for Hunger, a nonprofit that helps direct nonperishables to local food pantries during moves, remains one of our favorite nonprofits.   E...
This page requires JavaScript to work correctly. Please enable JavaScript and then refresh this page to proceed.