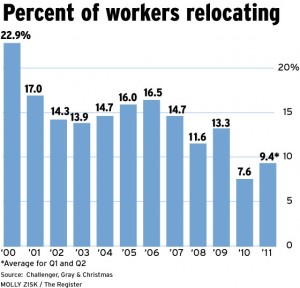 Unemployed workers are on the move, with 9.4% taking jobs out-of-town in the first quarter this year, compared to 7.6% last year, according to an article published in “The Orange County Register” earlier this summer.

During the recession, however, laid-off workers tend to be hesitant to move for work-related reasons. John A. Challenger, Challenger, Gray chief executive, said in the article that part of the reason for reduced relocations during the recession was due to homeowners being unable to sell their homes.

“Since there has been little improvement in the housing market in 2011, one might conclude that the increased relocation in the first half of the year is due to the fact that prolonged unemployment is compelling more job seekers to relocate, despite the challenges of selling a home in this market,” said Challenger in the article.

How Do I Tell My Employees We’re Moving Offices?
Moving offices is often a sign of growth and positive change within the company, so it can be a truly exciting time. However, it also means adjustment...

Moving and Job Loss: Strategies to Jump-Start Your Relocation
Sometimes people move because they have gotten a job in a new city or state. However, sometimes the reasons for a move are more challenging. Work oppo...
This page requires JavaScript to work correctly. Please enable JavaScript and then refresh this page to proceed.