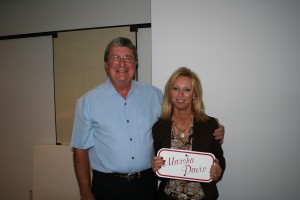 On a sunny, beautiful Monday in early March 2013, Marsha Davis, sat in her doctor’s office. Davis, Director of Revenue Accounting at Wheaton World Wide Moving, found a lump in her breast and her doctor was performing a biopsy. Her doctor was not optimistic the lump was benign, but Davis still had hope the doctor was wrong.

After the longest four days of Davis’ life, the doctor confirmed what she had been dreading. It was breast cancer.

Davis sat at work stunned, speechless with tears rolling down her face.

“When you get that kind of news, so many things go through your mind: ‘Am I going to die?’ ‘I’m not ready to die.’ ‘I won’t be able to see my grandson grow up.’ ‘How do I tell my husband, my son, my mom?’ My life as I knew it changed forever in a single moment.”

No one in Davis’ family had breast cancer, nor did she know anyone that had it, so she had no idea what she was about to endure. Davis had a long battle in front of her — a lumpectomy followed by 10 rounds of chemotherapy and 36 radiation treatments that lasted a year.

Despite the adversity, Davis found strength through the people around her.

“My husband was my ROCK!” She exclaimed. “I also had several great friends, family members and co-workers who gave me such encouragement, inspiration and support. Of course, my grandson Rece (who was four at the time), provided humor to my life at a time when I truly needed it.”

Davis continued to work at Wheaton during her treatments.

“They (Wheaton) allowed me to continue working and contributing through my treatments. They allowed me to work from home when I didn’t have the strength to make it to the office,” she said. “Most importantly they provided me with such unconditional, astonishing, unbelievable friendship, kindness and support through the entire process of kicking cancer’s butt!”

Davis is forever grateful for the Wheaton family that made kind gestures and sacrifices for her. Giving up paid time off, many employees took Davis to and from her four-hour chemotherapy treatments. Olivia Davis, the van line’s Sales Administrative Assistant, also formed a race team in Davis’ honor for the Susan G. Komen® Central Indiana Race for the Cure in April 2013. The team, “Davis’s Daisies,” raised more than $7,000 and was the fourth largest fundraiser in the state of the Indiana.

“The Wheaton World Wide Moving organization is not only a top-class act in moving, but they truly care about their employees,” Davis said. “I have witnessed several gestures of their generosity to many of my colleagues over the past 14 years. Never would I have imagined I would be one of the recipients of such outward compassion.”

With all of the support, Davis had her last chemo treatment on June 28, 2013, but had to continue with one of three drugs for a full year which ended this past April. She continues to have follow-up appointments every three month and takes a pill to slow the cancer cells from growing in her body every day for the next five-to-ten years.

After all Davis has gone through the past two years, she has been kind and brave enough to offer some inspirational wisdom for those who are fighting cancer and other life-threatening conditions.

“I would tell them it’s quite normal to mourn the loss of their health for a short time and that tears are appropriate,” She continued. “Cancer is beatable. The medical field has become much more educated with good information that can alleviate the fear.”

She added that the best resource is your doctor.

“There are a lot of reputable websites out there that provide great information, but there are a lot that are just full of garbage. Don’t believe everything you read,” she cautioned.
She also stated “Do not try to be super woman and allow others to help.”

Wheaton World Wide Moving is privileged to have Davis on its team and honors her, as well as all of the other breast cancer survivors during Breast Cancer Awareness Month.

Please visit the Susan G. Komen website for more information about breast cancer and Breast Cancer Awareness Month and how you can help.